As the daughter of a long time Birkman employee, and a part time employee myself, I didn’t think I needed to attend Signature Certification. My mother, Carol Buckner, has worked at Birkman for more than twenty years, and I had heard about the Birkman concepts all my life. I also took the Birkman assessment when I was 13, and worked at the office with my mom as a teenager. So, why would I need training?

However, a few months ago, I attended Birkman Signature Certification and it changed my entire perspective on how I collaborate and connect with those around me.

Signature Certification is the introductory training course offered by Birkman to prepare a person to fully interpret, review, and apply the Birkman information. It is essentially the groundwork for the Birkman Signature Report, the core Birkman report format. All the information that Birkman can provide starts with Signature Certification. After finishing Signature Certification, you gain a greater understanding of yourself, discover the fundamentals of Birkman, and learn the language of personality. You learn about Birkman assessments and the skills needed to interpret the Birkman reports as well as how to facilitate conversations that can empower others to have greater self-awareness. Through the interactive and kinesthetic style of Birkman training sessions, I had the opportunity to learn about the breadth and depth of insight the Birkman assessment can provide.
Learning about You

The Birkman Components are unique behavioral scales that measure specific elements of personality. For each Component, a person is given:

When discussing the Birkman Components, a report with everyone's score is displayed, allowing you to see how similar or different your personality is compared to the people in the training class. This immediately sheds light on how diverse personality can be. Even in our small group of twelve, almost no one had the same score, and most people didn’t even have similar scores.

We also dove into the Birkman norms, also referred to as the majority scoring pattern. For example, when talking about Social Energy (your sociability, approachability, and preference for group and team participation), most people are seen as being very sociable and friendly in their productive behavior. However, many have the desire for time alone, in small groups, or prefer a balance between large groups and time alone. In Birkman terms, this is known as higher Usual score and a lower Needs score.

When talking about Assertiveness (your tendency to speak up and express opinions openly and forcefully), most people show up as easy-going, (suggest rather than tell people to do things), while they expect others to be more clear and direct with them. This common pattern for Birkman is a lower Usual score and a higher Needs score for Assertiveness.

One of the things that made Signature Certification so fun and engaging was getting to participate in a number of group activities that helped reinforce Birkman concepts. For example, when learning about the Birkman Map, we were asked to stand on a life-size Birkman Map. The Birkman Map is a four-quadrant grid, with each quadrant being a different color representing four unique personality styles.

Everyone stood in the location of their Usual Behavior, then we moved to the location of our Needs. This allowed us to see where each person stood, deep in the corners, or more towards the middle. If a person is in a corner, they identify very strongly with those traits. If a person is closer to the middle, they identify with traits in all quadrants. We also got to see how a person’s Usual and Needs scores could move from one color or location to another. Seeing this in real time, how people moved from place to place, helped to solidify the message that people “show up” differently from how they expect their environment to be. 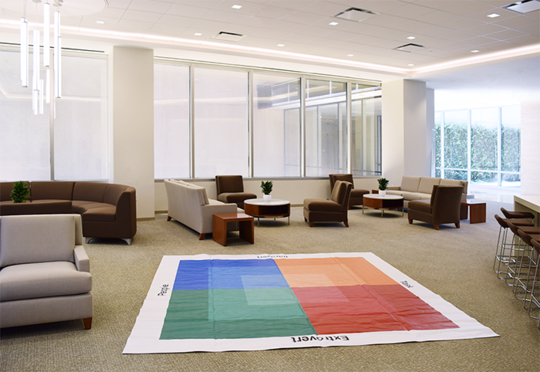 After seeing where everyone lined up on the Birkman Map, we were arranged at tables according to our Usual Behavior color and told to write down traits about ourselves. As you would expect, most people wrote down positive attributes:

Then we were asked to write about the traits of the people who were most different from diagonally across from us on the Map. Because we were describing a behavioral style opposite of our own, some of the behaviors we listed seemed judgmental:

As everyone read what the opposite side had said, we realized what little understanding we had of each other. At first, each person tended to get offended, reacting to the judgments written down. However, as we continued to read them, we realized how much each personality type can help the other. There was a clear bias for how we, as individuals, acted. At first, we were unable to see how much we really needed each other to balance out the traits that we may lack.

Where Work and Play Combine

The last section of The Birkman Method assessment asks you to order job titles from the most appealing to the least appealing. This part of the assessment measures what are known as Birkman Interests—the activities that we most enjoy doing either at work or in our personal lives. For example, my highest Interests are Musical, Literary, and Artistic while my lowest Interest is Administrative. When learning about Birkman Interests, I learned something extremely valuable—if the score for an Interest is below 10, it can be a demotivator. If the score is above 90, it becomes close to a Need. Essentially, if someone has a 5% interest in Numerical and a 97% interest in Outdoor they should not be put in a corner cubical of an accounting firm. Placing someone with a high Outdoor Interest near a window or allowing them time for breaks outside will help them balance that interest with their work.

Our Interests need to be balanced with our work. If you are not getting to do what you are interested in at your office or place of work, you should engage in that activity outside of work. For example, if you work as a salesperson for a pharmaceutical company and have a high Artistic score, you may not have many opportunities to express this Interest. In your daily work, you may feel the urge to draw, paint, photograph, or design. The key to keeping your Interests and career balanced is to know how to satiate the desire for one without overemphasizing another.

After attending the Birkman Signature Certification I was able to understand why, in the past, I clashed with people who were different from me. I now have an appreciation for these people because they can help me see different sides of an issue and can complement my weaknesses with strength. Now I can talk to people about the value in diversity of personality.

With the help of the Birkman Signature Report, I was able to gain a greater sense of self-awareness. Once you realize that your personal perceptions may have been skewed, you can adjust your behaviors and expectations accordingly. I am now able to better understand the way my behavior appears to others as well as understand other people’s behavior. I also have a greater understanding of my friends and family and can communicate more effectively with them.

Ontological Coaching with Birkman, by Robe...