How to Know If a New Employee Is Highly Engaged

Hiring and onboarding new employees is always a critical phase for managers as they develop their teams. A bad fit can cause frustration for everyone involved—the manager, the team, and the hire themselves. Quickly ensuring that your new employee aligns with company values and has an enthusiasm to learn the role can save you significant resources and stress in the long run.

My personal story of starting my career is one where the boss took a risk hiring me. I was applying for an entry-level marketing position, but my degree was in philosophy and my experience was mostly in copywriting, not general marketing. The one skill that I brought to the table was my ability to write—not much else. However, the boss saw potential in me, took a chance, and supported my engagement in those critical few months. Those choices became an important step in both my own professional growth and in establishing a successful marketing strategy for that small startup.

I learned a lot from that former boss—and from working here at Birkman—regarding hiring and supporting people that are a right fit to the role, the team, and the company. As you'll notice, most of the advice in this article is about attitude and potential, not tenure and skills. That's not to undervalue candidates that are experts in their field and have a wealth of experience, as there's no substitute for that. It's to make a point: that I've found it preferable to have an engaged new employee with a weaker skill set than a disengaged new hire with a developed skill set. Why? Because skills can be taught, but disengagement is a lot harder to fix—and can be contagious to other employees.

At Birkman, we believe in the immense capability of the human spirit (it might sound schmaltzy, but this sentiment is deeply ingrained into everything we do). The Birkman personality assessment is based on positive psychology, which is founded on the belief that people want to lead meaningful and fulfilling lives. If self-awareness of your own strengths is added to an empowering environment that allows you to pursue your passions, then creativity, productivity, and success are natural products of that reaction.

So what does this mean for you? If your job is to find a successful candidate, look for someone who's invested in their own development and cares about the contribution they make to your company and the world. If they're already engaged and capable, then the next step is simply to leverage that enthusiasm and expertise while challenging them to push themselves (and your company) to the next level.

Hiring new employees always comes with risks, but those risks can be reduced if you keep an eye on certain indicators of engagement. As you’re interviewing candidates or watching new hires on the job for the first several weeks, keep a keen eye on their actions and attitudes. If these four qualities listed below are readily apparent, then the new hire is already making the transition towards being a satisfied, long-term employee. 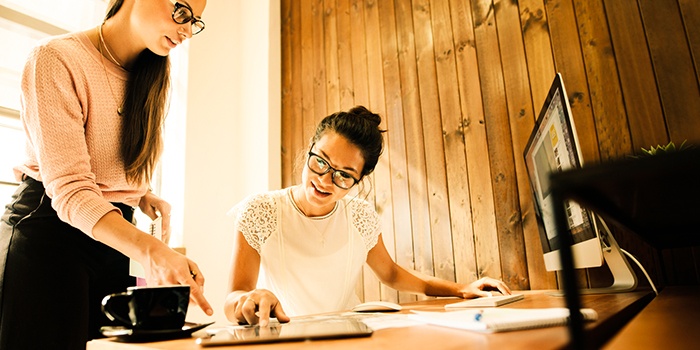 From company procedures to new software, new hires have a lot to learn the first few weeks on the job. Engaged new employees will be curious and ready to learn it all. They’ll readily ask questions to their coworkers and supervisors, taking notes for their future reference. This trait shows two key things:

Please note that not everyone will exhibit their curiosity in the same way. More introverted employees might ask questions in emails or in one-on-one meetings, while others who are more assertive may ask the group during meetings. Make sure to give new employees many opportunities to ask questions and give feedback during their first weeks.

Curiosity can be spotted in the hiring process, too. Interviews that are one-directional, where the candidate has no questions for the employer, are a red flag. If they aren't asking questions about the job (where they'll be spending 40+ hours a week), it can indicate they might be willing to take any position and aren't yet "bought in" to the mission of your company and the position's responsibilities. Here's an interesting article about hiring for curiosity: Why Curious People Make Better Employees.

They're offering up new ideas.

New hires have a fresh perspective that they're bringing with them to your company. The initial few weeks during their onboarding and training are an excellent time to get ideas about how you can improve current processes, technologies, and strategies. Maybe the new employee used different software in their past roles that they liked and can see how it may benefit your company.

If you don't stifle innovation with a "this is just how we do it here" mentality, there may be huge opportunities that the new hire can point out. So, give them a platform to suggest ideas, then listen to their feedback.

Highly engaged new hires that are learning (and questioning) the ropes at your company are huge assets, because they have the insight to recognize areas for improvement and the confidence to share that with the team. Again, the way they present their new idea may vary. As the Birkman assessment measures, people have different assertiveness styles—some people are comfortable directly expressing their opinions, while others might take a more suggestive approach.

They have a strong work ethic.

No one is going to show up for a job interview saying they’re not a hard worker, although some who claim to have a strong work ethic start to wane after a few months on the job. Keeping an eye on a person's drive is important during those first critical months as you're determining if the new hire is indeed a good long-term fit for the role.

Different organizations have different standards regarding the number of hours that employees are expected to work each week, and some employees naturally have more endurance for long days at the office than others. People also have different schedules that they prefer. Some employees may work two hours late everyday, but they take ample breaks to relax throughout the day. Others may take minimal breaks, but leave right at five o'clock.

The point is, work ethic can manifest in different ways, and it's important not to look at it from just one perspective. And the type of work that people do may differ—some may spend more time analyzing or strategizing than producing, but that's okay, because those are just as critical to the growth of a company.

What can't be justified is excessively long lunches, skipping out early regularly, constantly being distracted by non-work-related content on their phones, or constant chatter about personal issues. If these issues arise along with any performance issues regarding their productivity, it's good to deal with it head on.

They identify with your company values.

Values...mission...culture...some of these may seem like soft business terms, but they really get to what drives engagement (and thus retention and productivity). If you're spending more than a third of your waking hours in a week working on something, it's important to enjoy what you are working on and the reasons behind the work itself.

It's necessary to distinguish between company culture and company values. Culture is how you work, values are why you work—it's the end goal and mission that moves the company forward. It's the optimistic vision for the future.

Your organization's culture (style) is usually determined by leadership's natural approach (great article on this here). Culture may be reflected in many ways, including decision making styles (risky vs. conservative) and which team activities are prioritized (group meditation or happy hour).

However, it's important that companies don't hire to match their culture, because that over-homogenizes the team (relevant article here). Dissent within the organization is useful for presenting leadership with alternative perspectives on any given problem—at Birkman, we're huge advocates of thought diversity for this reason.

So, why do values matter for engagement? Values should drive decision making throughout the organization. If an employee's values are aligned with that of the company, then they will believe that the work they're doing each day is contributing to a greater good and that the leaders in the organization are making a positive impact with the direction of the company. This is motivating in itself for workers, regardless of role.

How can you sense if a new candidate or hire is aligned with company values? Just learn about them during the interview and onboarding process.

If your company has a strong sense of its own values (and the marketing department is doing their job with making it clear what the company stands for), then the candidate or new hire should already know the company values before you meet with them. If they're not familiar with the values, inform them and gauge the enthusiasm of their response. Again, if the employee is asking questions (curious) or offering new ideas of how to further the company's values, that's highly reflective of a strong affinity and a good fit with the company.

If your new hire checks all of these boxes—they're invested in the company with a drive to work hard, learn new skills, provide ideas for improvement, and fulfill the company vision, then that's a highly-engaged new employee. You can expect to see their enthusiasm reflected in their work performance and provide a boost of energy to their team. They're an employee that you should continue to cultivate and develop, as they may be easily retained for years to come.

Engagement is a critical element of high potential (HiPo) employees, so keep an eye out for their other qualities (aspiration and ability) that may be indicative of talent equipped to take on leadership positions in the future.

Reaching Further: The Birkman Method behavioral assessment helps you quickly learn employee motivational interests and personality strengths. It can be exceptionally helpful for placing a new hire on the right projects and recognizing both their unique contribution to the team as well as preferred modes of communication. If you're looking to better understand how to support and empower your new employees, Birkman may be a helpful tool for your organization.

Methods for Onboarding a New Hire into You...

The Benefits of Using a Personality Assess...

3 Ways to Engage Your High-Potentials (Bef...