How to Constructively Deal with Criticism in the Workplace

Whether it’s about your habits at home or on the job, criticism can be tough to take. It gets even tougher if the criticism is completely unexpected and coming from a coworker or boss.

Regardless of your initial emotional reaction to workplace criticism, it’s crucial to maintain your composure while keeping a key point in mind. Expected or not, criticism can lead to personal growth. The determining factor behind that growth is how you deal with the feedback. The following tips can help you deal with criticism in a positive and beneficial manner. 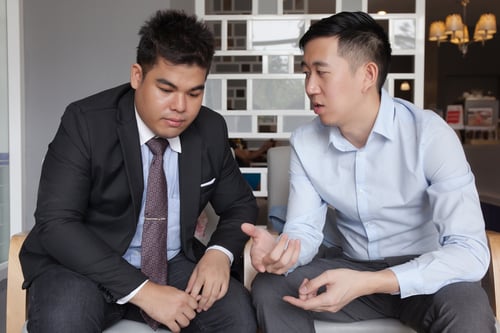 Understand the Difference between Constructive and Destructive Criticism

All criticism is not created equal, with a distinctive difference between constructive and destructive criticism.

Constructive criticism is geared toward improvement:

An example of constructive criticism may be a coworker mentioning, "You could get faster, more accurate results on your reports if you tried the new online tool the company just purchased."

Destructive criticism generally has the opposite effect:

If that same coworker were to offer destructive criticism instead of a constructive suggestion, it may sound like, “Your reports are always so slow and full of mistakes just because you’re too scared to try out the new online tool.”

Even if the message is delivered in a constructive way, you can still transform constructive criticism into a destructive force with an overly negative reaction, and vice versa. If you use the feedback to learn something about yourself or the other person, it can be constructive. If you use it to beat yourself up and fuel feelings of failure or resentment, it can be painfully destructive to important workplace relationships.

Receiving Criticism in a Professional Setting

Feedback conversations can be difficult, and there's ample room for misunderstanding and hurt feelings.

The first step toward a constructive conversation is to listen closely. Pay acute attention to the speaker and what he or she is saying through words as well as body language. Focus on the message being delivered, digest it, and then repeat the message back to the speaker in your own words.

While this type of interpersonal relations can be tough, be careful not to exaggerate or jump to an extreme conclusion. For example, if your boss mentions the inaccuracies of some of your reports could hurt business, don’t translate the message to mean that you aren't an effective employee. Listen to what is being said, not what your mind is telling you to hear filtered through fear or anxiety.

If you’re not sure what’s being said, or the message is unclear in any way, ask questions. If your boss is talking about inaccuracies in some of your reports, you could ask for examples of the errors, how frequently they’ve occurred, and what you can do to ensure they don’t happen moving forward.

Once you’re sure you understand the criticism, assess if it’s constructive or destructive. Part of this answer depends on how you take the criticism, but another part relies on how it’s being delivered. A boss calmly and respectfully pointing out a few report inaccuracies in the privacy of their own office is significantly different than a coworker interrupting your presentation in the middle of a staff meeting to express harsh judgment.

Although assessing the type of criticism you’re receiving can help you determine how much weight it holds, even criticism that holds little to no weight should not elicit a knee-jerk reaction. In every case, resist the urge to fight back or argue – have respectful dialogue instead. Reacting defensively or with a counter-attack is never apt to make things better – only worse.

See It as an Opportunity for Personal Growth

Once the feedback conversation is complete and you’re back in your own space, don’t try to pretend it never happened. If you ignore the feedback, you're missing an opportunity to grow. Instead, reassess what was said and the cause of the issue that was criticized. In the case of inaccuracies in reports, the cause could be your fear of trying out the new online tool, or any type of change.

Also think about the criticism and decide for yourself if it is valid. If you think so, great – you now know you have area for improvement.

If you're unconvinced that the criticism is fair, ask others for their opinion. If they are in agreement with the person who gave you feedback, it's important that you take steps toward realizing that the world around you has noticed a pattern – and it's worth it to listen. Your plan for improvement should outline what you can learn from the criticism and action items for changing your approach in the future. If you are chronically late for meetings, for example, perhaps you can add calendar reminders or smartphone alerts leading up to the meeting.

If others disagree with the feedback given to you or think it was expressed too harshly, you still don’t want to come back with a counter-attack. Take time to reflect on the criticism, calm down, and schedule another meeting to discuss. It may be difficult to have such a discussion with a boss, so examine the criticism very closely before scheduling a follow-up meeting. Be courteous during your follow-up, perhaps pointing out how you can understand why a person thinks something to be true, but then backing it up with facts that illustrate it isn’t.

Even in the worst case scenario that involves destructive, public criticism that borders on ridicule and is completely untrue, you can still learn from it and work on your employee development. Improving interpersonal relations is no easy task, but with the right mindset, everyone can make improvements and grow in this area. You can learn a great deal about the person delivering the criticism and even more about yourself, provided you maintain your composure as well as an open and contemplative mind.

Accepting and reflecting upon criticism is an important part of growing as a professional and as a team. A personality assessment can be a great tool to use during times of conflict within teams, especially surrounding sensitive communication such as criticism. The Birkman Method behavioral assessment measures not only how emotionally expressive a person is, but also how candid or diplomatic they wish others to be with them. Knowing these personality metrics for yourself and for your coworkers can help you be more self-aware both when giving and receiving criticism in the workplace.

Methods for Onboarding a New Hire into You...